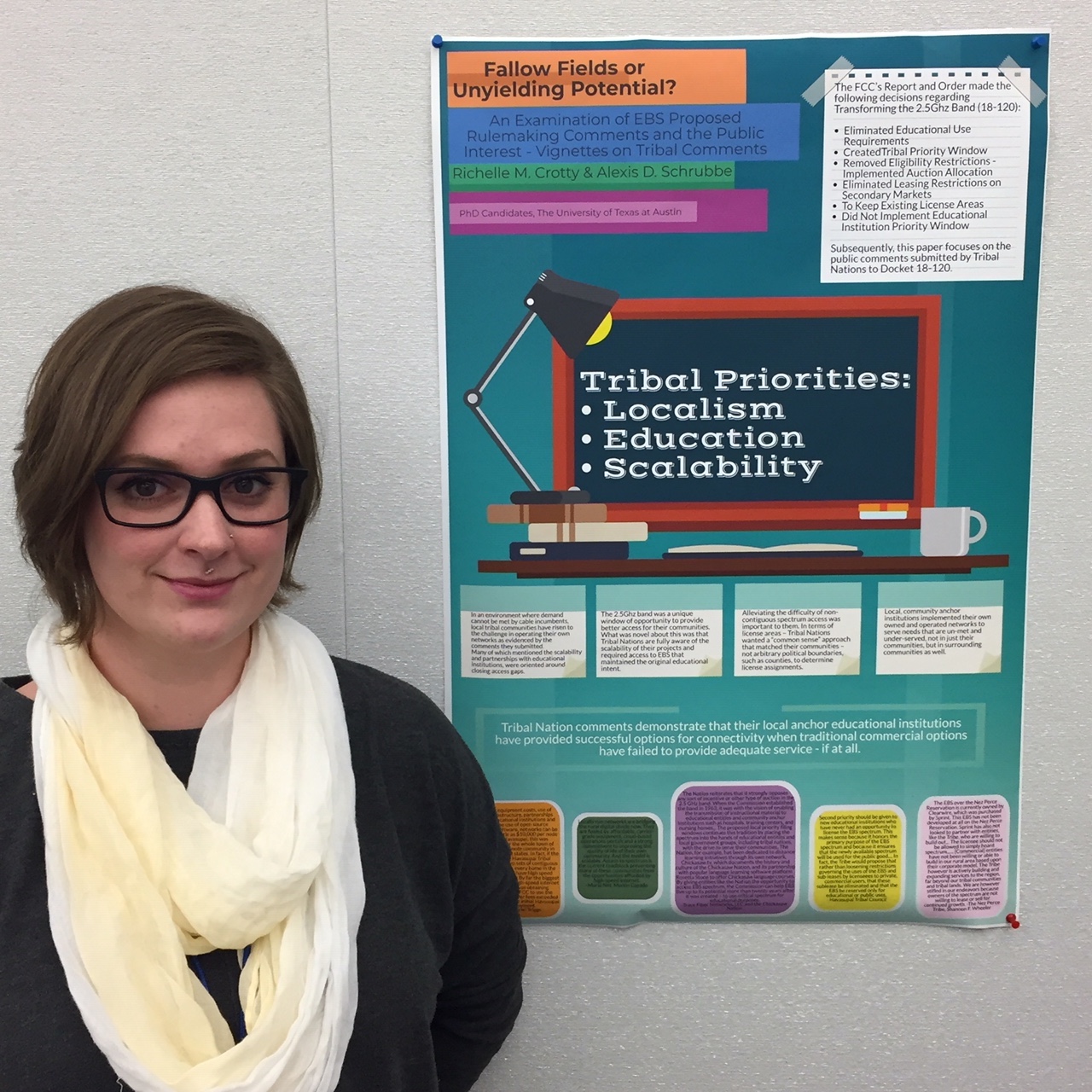 TIPI awarded Richelle Crotty a travel fellowship to TRPC47 to present her poster: Fallow Fields or Unyielding Potential? An Examination of EBS Proposed Rulemaking Comments and the Public Interest.

Regulatory frameworks are in place that fund the distribution of the Internet to public anchor institutions, like schools and libraries, through e-rate subsidies; however, recentrulemaking initiatives suggest spectrum allocation to these public anchors be reevaluated by the standards of the market. In 2018, the Federal Communications Commission (FCC) sought comments on transforming the allocation of Educational Broadband Service (EBS), the 2.5 GHz band, and whether to open up EBS spectrum to commercial providers. This spectrum band may be valuable spectrum for 5G buildoutin the near future; however, besides speculated commercial uses, this band of spectrum has empowered public anchors and other not-for-profit EBS license holders to experiment with building wireless Internet networks. This research contributes to current debates around EBS spurred by the FCC’s NPRM and seeks to explicitly connect this conversation to the FCC’s consideration of the public interest in spectrum policy.
The questions that drive this research are the following;

The purpose of this policy analysis is to explore themes present in the FCC’S EBS NPRM through the public comment system and through transcripts of ex-parte presentations and filings.

The comments were collected from the FCC’s publicly available database, the Electronic Comment Filing System (ECFS), and entered into Dedoose, a cloud-based qualitative software platform, and a coding scheme was created to organize the comments thematically by research question. As of this writing the FCC has not issued a final rule in Docket 18-120; the authors anticipate the Commission issuing a Report and Order in the next few months to contribute to the findings of the last research inquiry.
While the analyses of public comment are not a novel research approach, the potential that EBS spectrum represents for public anchors and for the under-connected American hinterlands is entirely new and unrealized by many potentially eligible public anchors as the Commission has not assigned any new licenses in the EBS band since 1995 (Yankelevich, Shapiro, Dutton, & Murphy, 2016). This paper challenges the assumptions of the NPRM and demonstrates how the proposed changes not only are
opposed by the majority of public comments filed but fundamentally undermine the explicit public interest and educational intent of EBS spectrum.

Over many years, locally-initiated and operated broadband infrastructure projects have attempted to resolve the last-mile dilemma. Many generations of do-it-yourself (DIY) network efforts that are either wireless, such as community mesh networks, or wired, such as fiber cooperatives, exist, but in the U.S. scaled developments have been stalled for a variety of reasons that include regulatory prohibitions. This research examines a current ‘third wave’ of community networking, marked by local and DIY efforts as well as technological innovations. We investigate approaches that are technological, managerial, and also aimed at regulatory and economic incentives that may be appropriate in the U.S. We argue that this ‘third wave’ of community networking efforts and technology demonstrates new connectivity models that can solve some of the nation’s broadband problems, especially when accompanied by supportive federal and state policies. The technological, organization, and market implications of the third wave of community networks suggest new policies helpful to provide improved broadband services in various regions amidst incumbent protectionism.