Summer Institute 2018 in Lisbon and Porto

UT professors are again teaching from June to mid-July over 2 campus locations in Portugal: INOVA media labs in Lisbon and the Media Innovation Labs in Porto.

This year’s topics are far-ranging and are up-to-date with the latest in themes related to Digital Media.

Spanning the month of June, these 4 courses are open to students, alumni, faculty and the general public and includes:

This one week course is focused on the post-production stages of 360º and virtual reality video workflow, optimizing the image and removing unwanted artifacts, allowing participants to work on their personal projects.

This course lies in the direction of exploring the contours of narrative cinema in the age of digital across the globe.

A one-week hands-on skill training of the Python software ecosystem for data preprocessing and cleaning, analysis and visualization (Numpy, Matplotlib, Pandas, and possibly visualization libraries such as Bokeh).

This one week course explores the new approaches, formats and practices of culture and arts reporting, facing the digital ecosystem, in one hand, and the impact of cultural and creative industries, in the other. The course includes hands-on skill training. 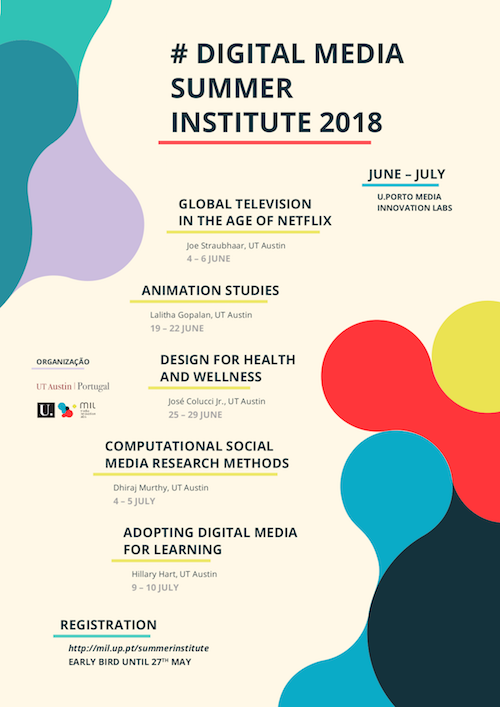 During the months of June and July, 5 courses are offered at the University of Porto to students, faculty, staff and the general public and include:

Global Television in the Age of Netflix by Joe Staubhaar

This workshop will cover major current dynamics in national, regional and global television, focusing on Europe, US and Latin America. It will look briefly at technology and industry trends and how television genres are developing at different levels.

A workshop exploring the distinctiveness of animation in the age of the moving image. It will look into the route from drawings and optical toys to pixels and codes with no straight story in place about the rise and persistence of animation.

Design for Health and Wellness by José Colucci

A five-day workshop focused on developing a project as a fast simulation of the work of a professional design studio. Included is an immersive experience of lectures, hands-on workshops, fieldwork with emphasis on design solutions for Health and Wellness.

This workshop will explore tools for textual and visual social media data analysis using Netlytic and Gephi to produce graphs, tables and figures to be used in an academic context.

This workshop will focus on how the pedagogical models underlie the successful use of digital media, giving educators guidelines to adapt their courses to integrate these new tools.

SMART Data Sprint: Interpreters of Platform Data 29 January – 2 February 2018 Facebook Group: SMART Data Sprint Universidade Nova de Lisboa  I  NOVA FCSH  I  iNOVA Media Lab SMART Data Sprint is intensive hands-on work, driven by social media data. We adopt inventive and experimental ways of reading, seeing and analyzing platform data, with the aim of responding to a set of research questions. For one week participants will have the chance to attend keynote lectures, short talks, and parallel sessions of practical labs. After that, experts and scholars will invite participants to join projects and work in a collective problem. We are sponsoring Keynote Speaker Dhiraj Murthy who will be discussing Twitter in this context TIPI is pleased to announce that Aubrey Lauren O’Neal was chosen to receive a scholarship to attend the Winter Institute in Lisbon.

Open in a Time of Closure

Open Institute V2, “Open in a Time of Closure,” sought to explore themes with an emphasis on extreme or agonistic approaches to free/open practices. It is the follow-up to the original Open Institute in Austin, in 2015 – already another era. Bringing expert analysts and practitioners from several vectors of Open (Open Knowledge, Open Science, and Technology, Open Borders, etc.), it combines hands-on workshops and activities with world-class keynotes. Lectures will be public and open to the Madeiran community, while workshops will be available to students in the Digital Media program at Porto, FCT/Nova, Austin, and M-ITI. We had around 30 students join us both from UT Austin and the Portuguese mainland.

Many of the ideas around ‘open’ in the last two decades are facing dramatic retrogression. The open Internet is under threat, already lost in much of the world. Borders are closing in the West; negative impacts of the closed scientific/academic publication system are becoming clearer; public speech and transparency are suffering throughout the world. Meanwhile, states are imprisoning principled practitioners of agonistic openness like Edward Snowden, Chelsea Manning, and Texas native Reality Winner with a vigor not shown since the enlightenment.

How do the last few years challenge or reinforce the need for openness? Can principles of openness developed in prior decades survive closure? Are new techniques necessary? These questions and more will be addressed within the community.

Open Institute V2 is part of the Digital Media Ph.D. between UT Austin and U. Porto, New University of Lisbon, and Madeira Interactive Technologies Institute. 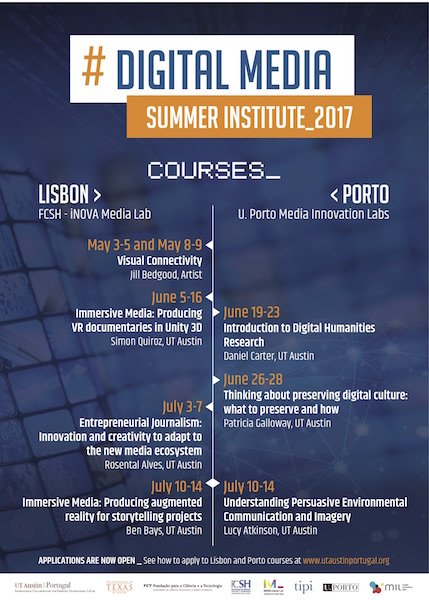 This year’s Summer Institute spanned from early May to mid-July and was simultaneously held over 2 campus locations in Portugal: INOVA media labs in Lisbon and the Media Innovation Labs in Porto.

This year, many students from the academic programs and industry participated in 7 courses that ranged from 1-2 weeks. They included topics both theoretical and practical, and course evaluations were very positive.  Most of the written comments from students noted that these short, intensive courses enabled deep reflection as well as solid interaction with the UT guest faculty.  We anticipate these interactions will also translate into meaningful research projects in the future.

Courses offerings were of a great variety and included:

Through TIPI, we were happy to be able to provide accommodation and travel stipends for all students travelling from other cities in Portugal. Not only were students part of the classes, but some courses where also open to other faculty members and outside companies. The success from this summer is paving the way for discussion around an upcoming Winter Institute! 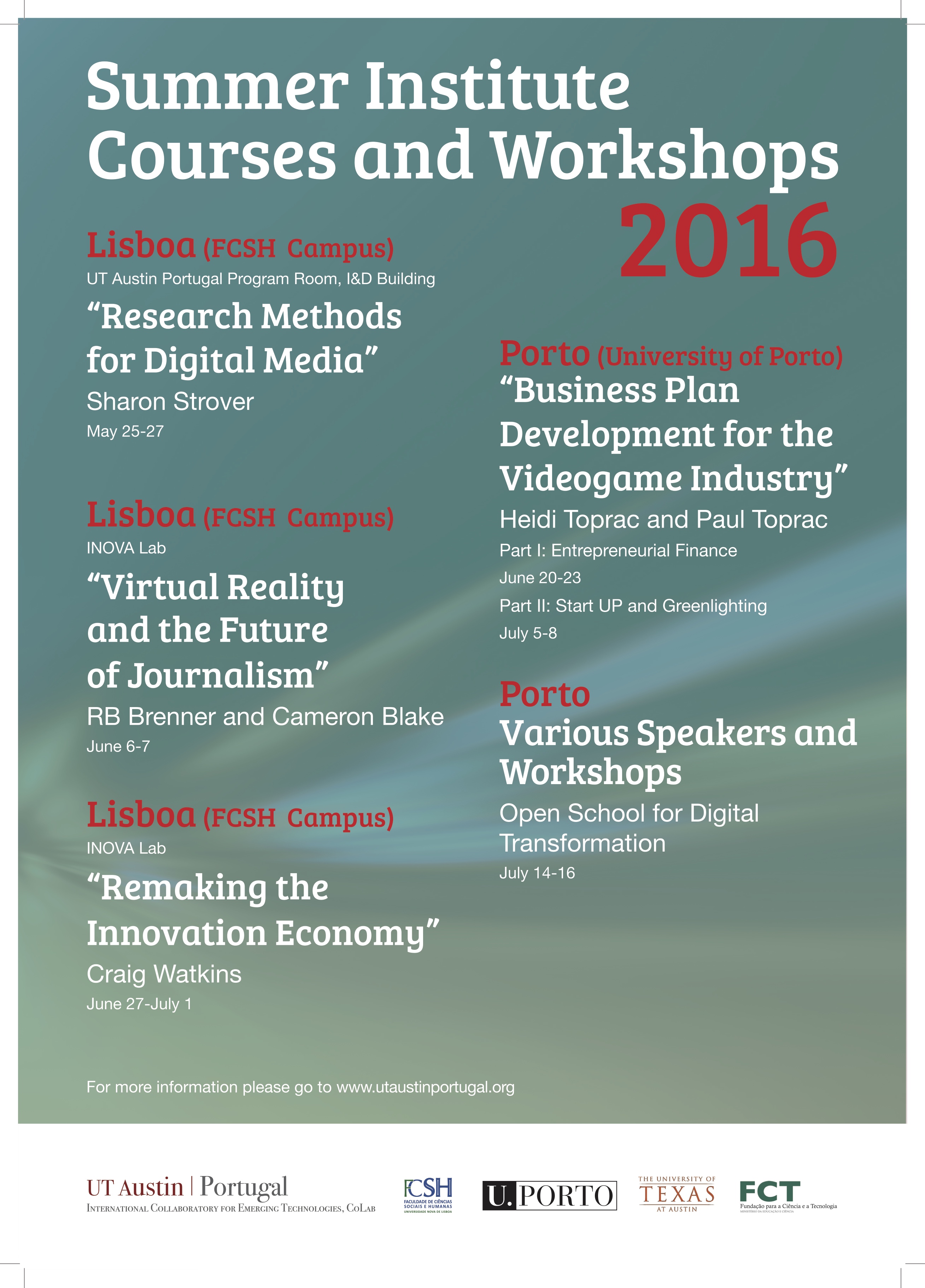 The Summer Institute in Portugal provided excellent courses and workshops being held in both Lisbon and Porto. Starting the season in Lisbon, Sharon Strover presented “Research Methods and Digital Media”, May 25-27 and this was followed by RB Brenner and Cameron Blake’s, “Virtual Reality and the Future of Journalism” at INOVA lab June 6th and 7th. Craig Watkins taught “Remaking the Innovation Economy” from June 27-July 1. At the University of Porto, Heidi Toprac and Paul Topac provided a 2 part course on “Business Plan Development for the Videogame Industry.” Part I, Entrepreneurial Finance goes from June 20-23 and Part II, Start UP and Greenlighting continued from July 5-8. The season wrapped up with various speakers and added workshops at the Open School for Digital Transformation from July 14-16.

Portuguese Delegation in Austin during January 2016

TIPI had the honor and pleasure of hosting a delegation of invited Portuguese researchers from several universities for a full week of scheduled events during January 22-27, 2016. The goal was to continue to foster and create new research collaborations between UT Austin and Portuguese researchers. Delegates included Nuno Correia, Ruí Rodrigues, António Coelho, Raul Vidal, Sergio Nunes and Manual Damasio.

We started the week with a series of dynamic student presentations and followed this up with numerous exploratory meetings all related to different fields pertinent to digital media. They included:

​R.B. Brenner/Virtual Reality
B. Pennycook/New initiatives at the Butler School of Music
J. Bernhardt/Health Communications
B. Korgel/Applied science at the atomic and molecular scale
P. Toprac/Gaming

And culminating with an outstanding conference hosted at the I-School, with Randolph Bias as Master of Ceremonies!

The 2015 Digital Media Summer Institute began in May! Two classes were  held in Lisbon: Digital Media in Theory and in Culture,” taught by UT Austin alumnus Chris Lucas from May 25-June 5, and “Tag You’re It: Vernacular Classification of Images, Sound, and Video,” led by Sam Burns, a doctoral student in the UT Austin iSchool, from July 6-17. In Porto, Radio-TV-Film professor Kathleen Tyner will teach “Media and Information Literacy in a Digital World” on June 4-5, 8-9, and 11. Paul Toprac, Associate Director of UT’s Game Development Program will teach “Game Design and Development” in sessions running from June 11-23, with final projects presented July 1. Course details and application instructions are here.

Monica Mendes, an alumna of the Digital Media doctoral program, and Nuno Correia, the program’s academic director in Lisbon, are attending the Moody College of Communication New Agendas Conference on February 26-28. The annual conference, which features the research of emerging scholars and focuses this year on immersive media, was organized by Sharon Strover. Mendes, who is now a professor at the University of Lisbon, will present some of her dissertation research in a talk titled “Creating Immersive Experiences of Nature Using Networked Surveillance.” Correia will serve as a conference discussant. The two will also meet with Digital Media doctoral students who are visiting researchers and enrolled students at UT. A program of the conference is here.

One of the major efforts of TIPI in the last several years is the UT | Austin Portugal Program, a major research and educational collaboration between UT Austin and principal universities in Portugal, funded by the Portuguese Foundation for Science and Technology. Faculty members associated with TIPI have taught courses at partner institutions, served as co-advisors for Portuguese students visiting UT, and engaged in major research projects with colleagues in Portugal. Students working with TIPI have had the opportunity to participate in these projects, assisting with the collection and analysis of data. The UT Austin | Portugal Digital Media Program was established in 2007 to build capacity in Portugal for emerging digital media industries. Three areas are at its core: research, education, and building capacity. In addition to several successful multi-year research projects, three permanent educational programs resulted from the collaboration: an MA program at the University of Porto and PhD programs at U.Porto and the new University of Lisbon. Faculty members and students associated with TIPI have also been involved in numerous capacity-building annual events and educational programs in Portugal, including the Gary Chapman International School on Digital Transformation and the Summer Institute. The UTA-P program has periodically collected material on its numerous activities in annual reports, available below.