In 2017, our research team visited Calais, ME for the Maine State Library Hotspot Lending Assessment project. Calais, Maine is a small city situated on the St. Croix river bordering the Canadian town of St. Stephen, New Brunswick. In the morning rush hour and after business hours have ended, the city’s border crossing bustles a bit with daily travelers, and the town population swells during summer’s tourism but there are about 3000 permanent residents. During our visits to Calais for the initial project, the team heard from residents that fiber Internet would soon be coming to every house and business in the town, provided by a local utility company. This was astonishing, because at the time, the library was loaning wireless-based mobile hotspots to patrons because of the abysmal broadband service in the area.

The promise of fast and reliable Internet has come to fruition for these towns in East-central Washington County. Dan Sullivan, President of the Downeast Broadband Utility, shared the story of how Calais and Baileyville became the first locations in the State of Maine to own their own fiber to the home broadband utility – the Downeast Broadband Utility (DBU). Importantly, we learned that the real catalyst for more broadband reach was local community action and a robust partnership between two Washington County towns; Calais and Baileyville. Both towns are located along the St. Croix river adjacent to the Canadian border. The main street of downtown Calais overlooks the St. Croix, and the two nations are so close, about 300 meters separate the border stations posted at the ends of a short international bridge. Neighboring community Baileyville, situated thirteen miles upriver is anchored by a paper pulp plant that has been in operation since 1904.

During our conversation, Dan recalled for us that the idea of a fiber network sprouted when the local economic development coordinator approached him seeking development ideas. Dan recommended that building fiber between the two towns would sustain business at the paper mill, and grow business in the surrounding communities. Woodland Pulp was shouldering exorbitant costs to stay online, and hypothesized they were losing employees because of the poor connectivity in the area.

At first, the town approached the local cable incumbent broadband provider and asked whether the company would build a better network if the town raised the money for construction, but the incumbent provider turned down their offer. The cable incumbent is a national provider, offering speeds of 5 Mbps/250-500 Kbps for a price tag of around $200 per month in Calais. This is a price out of reach for many families and offers speeds that fail to meet the modern data demands of the average household. Dan shared with us that Baileyville and Calais are “fierce rivals on the basketball court” but their lackluster broadband service united the towns and forged a union that is pioneering how rural Mainers think about broadband.

Getting the two communities on board was a task Dan was prepared for because he had been “making noise” at the state level regarding broadband for a decade. Dan had made a habit out of traveling to the state capital during broadband-related legislative sessions and pressing his representatives on why government was funding the build out of outdated copper networks in rural areas. From his perspective, if the networks are owned and maintained by citizens, it ensures universal service regardless of a person’s location. He explained, “When the electric grid was built, we didn’t say to someone in rural Maine, well, you get 12 volts and someone in Portland gets 120 Volts. No, we said everyone gets 120 Volts.”

When city meetings were held to gauge interest on the creation of a local broadband utility, the citizens of Washington County agreed with the logic of broadband as a utility but were concerned whether or not building a locally-owned network would raise their taxes. However, the subscribers, not the taxpayers, would pay back the infrastructure build out cost. After a broadband feasibility study was conducted, the DBU found it only needed a 30% take-rate to support itself, and 97% of surveyed townspeople answered they would subscribe to the service. The funding for the project was secured by local banks who realized the potential fiber holds for greater economic development in the region.

Dan shared with us another important aspect embedded into local ownership of broadband infrastructure, “Even if for some reason, the network can’t raise enough money to support itself, the installation of fiber is a capital asset that the people of Baileyville and Calais own and can re-sell. We told them, this is owned by you, this is a capital asset. Even if this goes belly-up, the fact that you’ve run fiber to every single residence and business in town? You could totally unload it – but you won’t need to because we will have such high demand.”

Dan’s experiences advocating for broadband in the statehouse aided the cost and timeline of the network buildout. There is a rule in Maine which afforded owners of utility poles to take up to 170 days to approve each connection point that DBU wished to access.  Maine last changed its pole attachment rules in 1993, the same year that internet provider AOL began mailing its walled-garden Internet browser on CDs to homes. However, because of the efforts of DBU and others, the rule (Attachments to Joint-Use Utility Poles; Determination and Allocation of Costs) was changed and utility companies now are allowed to attach at the “bottom, back, or side of pole so the existing wires don’t need to be moved around.” Dan explained, “that one rule change alone saved DBU $150,000 in make-ready costs.” 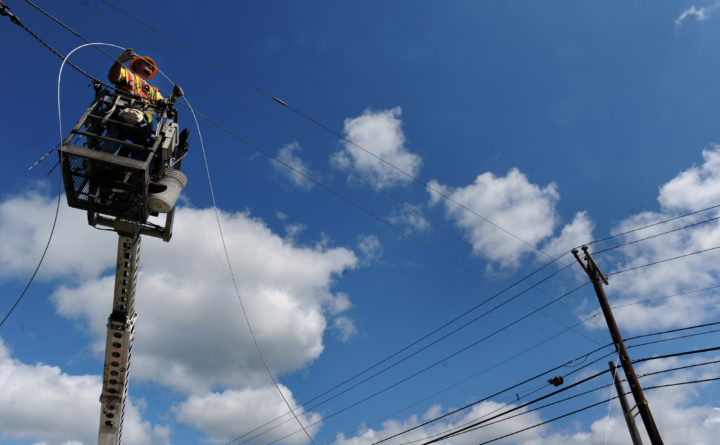 The network is state of the art, offering each subscriber a “home run” symmetrical fiber connection to their home. Dan shared that, “every residence and every business in town has their own dedicated piece of fiber. A lot of fiber networks run splitter networks where they run a piece of fiber and split it in to two or three different nodes. This type of connection still has incredible speeds but what we wanted was something that we could assert is “future proof” to our subscribers. As the technology gets better and faster, all we have to do is change out the lasers at the end of the system because the glass is there forever.” Also, DBU is part of a redundant backbone ring that runs through Canada and Boston: meaning if Boston goes down then the traffic is sent up through Canada, and when Canada goes down, the traffic is routed through Boston.

Dan’s promise to the initial adopters in Baileyville and Calais that the demand for fiber is strong enough to support the network not only has proven true locally, but has spread to other Downeast or rural Maine cities and towns. The nearby town of Alexander voted “overwhelmingly” to join DBU. Positive network effects compound the value of joining because as Dan explained, “…all the legal, insurance costs, even putting the communication buildings in place, the regulatory work, it’s all in place because of DBU.” On the other side of the transaction, DBU asks towns wishing to join the network to pay ten percent of the total cost of construction back into the utility to cover the costs that Calais and Baileyville have already made. Dan estimates that at least 30 other towns in Maine want to know how they can either create their own local broadband utility or connect to DBU. Dan feels that DBU’s anchor institutions – or the major drivers supporting this endeavor – are not industrial or business institutions but instead the anchors are “the citizens of the towns” who are finally being included into the information age by infrastructure built with longevity, capacity, and importantly, autonomy in mind.