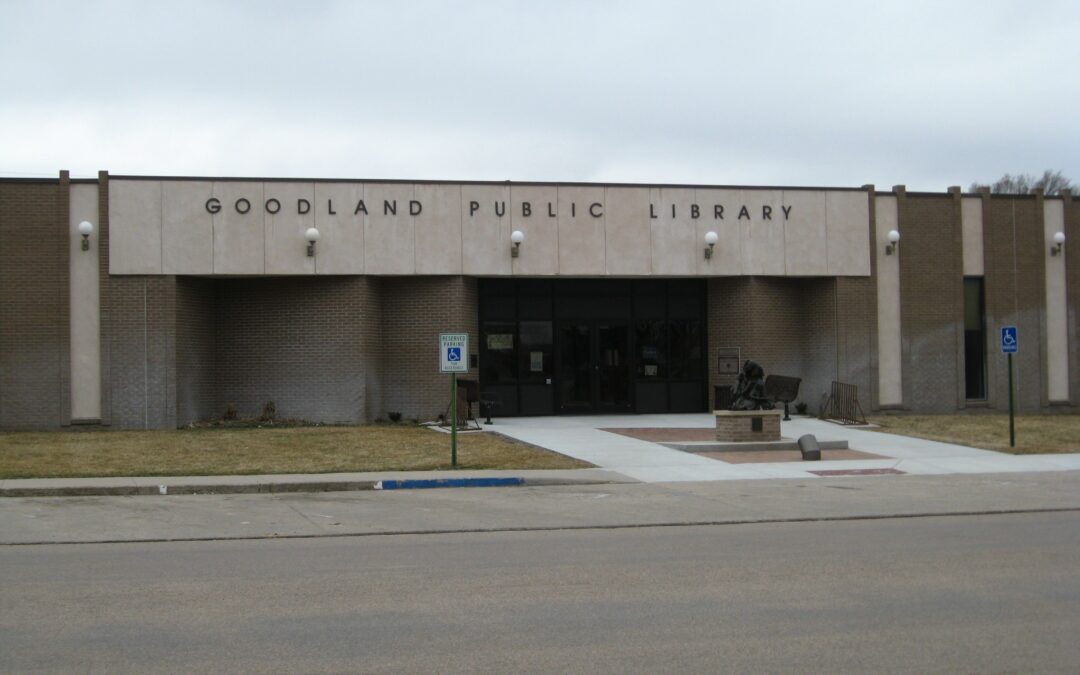 Located three hours from Denver, Goodland Kansas is in the Northwest corner of the state.

Goodland Public Library, part of the Northwest Kansas Library System (NWKLS), implemented one of the broadest-utilized lending programs in the Kansas State Library hotspot program. The library is highly regarded by the citizens of Goodland, as reflected by the number of people bustling in and out of the very large and bright space seated across from the Stanton County Courthouse. The library moved to their present facility from a very small Carnegie building in the 1970s. Goodland Library’s modern footprint affords the space to house 14 computers and provide free Wi-Fi for the entire block, including the parking lot and street parking adjacent to the library.

In order to announce that Goodland Library would be offering patrons a chance to “check out the Internet,” library staff posted about the program on Facebook, on their website, and ran advertisements on the radio and in the local paper as well as hung flyers and posted cards in the library. At first, early adopters of the hotspot program learned about hotspot checkouts on the library’s Facebook page. As the program continued, more people learned about the program through word-of-mouth referrals.

The library director initially believed the hotspot lending program would be popular among families looking for a mobile solution to take the Internet with them on a family vacation. However, she was surprised to learn that many patrons checking out the hotspot did not have Internet access at home and relied on the device to fill a critical need.

The director explained that around 70% of Goodland’s population is on a free-or-reduced lunch program and that there is a large under-served population in the area. Unfortunately, the director felt the number of under-served may only grow due to a nearby prison closure affecting employment in the area; she regretted to say she personally knew people who would be losing their jobs.

The hotspot program was popular, had a long waiting list, and very few issues with service, implementation, and loss. The library director indicated she had few problems compared to some of the other participating sites and nonchalantly discussed the ease of adding the devices to Goodland’s catalog.

She appreciated the monthly meetings set up by the Kansas State Library, but suggested that as the project came closer to the end, libraries should be able to opt-in to meetings due to the fact that the meetings were less pertinent to those fortunate enough to not have problems.

After the expiration of the state library grant, Goodland Public Library implemented a hotspot lending program of their own and expanded access tailored to their patrons’ needs. In order to fund the $40/month per device cost, the director secured funding through the library board. To continue the program, Goodland Library negotiated with Verizon, the same carrier that provided service during the state grant. The current program has unlimited data with the promise of no throttling, and Verizon included a brand-new set of Wi-Fi units. Verizon allowed them to keep the devices from the state grant, and Goodland has them stored as back-up in case a newer device fails. The library circulates three devices and are planning on adding a fourth.

Goodland initiated an interesting change from the state grant protocol and dedicated one device solely for short-term lending. Goodland has one short term device and the remaining devices retain the loan period of 7 days.

The director explained that her patrons shared with her they sometimes only needed the device for an evening or two, but that they could turn in the device right away again for others to use. In response, Goodland implemented a loan period of 1-3 days for one dedicated hotspot device.

Also, Goodland instituted a publicly-accessible Google calendar for patrons who wanted to reserve a device. The calendar schedules loan periods and accounts for waiting lists and reserves. This transparency affords patrons the chance to plan ahead and schedule important projects during the time they have access to a hotspot.

The director estimated that out of 85 check-outs, 40 of those check outs were wholly novel. This suggests that 47% of the population using hotspots had never been library patrons in the past.

She noted that a recent immigrant to the United States expressed both shock and joy in learning that libraries in America loan out the Internet; he did not have Internet access in his home country at all.

In another example of hotspot uses, local 4-H volunteers checked out hotspots to use at the Stanton County Fair in order to provide attendees the option to pay with credit cards. Following the example set by fair organizers, this year’s high school reunion will be using the hotspots so attendees can pay with their credit card. As well, a 500-person bird-hunting organization depends on the library hotspot device to register members during their annual convention in Goodland. As a part of the convention, the bird-hunting organization raffles off hunting rifles. Kansas law requires the club to register the winners’ rifles before the winners can take the rifles home to their respective states. The hotspot afforded fast and reliable registration for those hunters lucky enough to win. The hunting club will check out the device again for the forthcoming convention, and has entered itself back on Goodland’s Google calendar in preparation for the fall convention.

The breadth of Goodland’s hotspot program expanded beyond individual users and into social organizations, touching thousands of citizens in Northwest Kansas.

A massive copy of Malliot’s ‘The Gleaners’ hangs in the Goodland Library. The copy was commissioned for the local bank, and details about the artist remain unknown.

This library also offers significant services to children and their parents, providing a legally recognized “safe space” for separated or at-risk families to drop off and pick up children. There are weekly play time sessions for families and kids but these play times serve a dual purpose: the library invites specialists such as child behavioral professionals, speech pathology clinicians, legal professionals, and other critical social and developmental experts for parents to approach if they choose. Goodland Library prides itself on providing an environment to encourage the welfare of their patrons by providing low-stakes family education in a comfortable and beloved anchor institution in Northwest Kansas.

Programming examples listed above may not be directly related to the success of Goodland’s hotspot program, but instead reflect the inclusiveness and creativity the library enacts in order to serve the diverse needs of their rural population of  2300 people.

A summertime Great Plains thunderstorm rolls over the Stanton County Courthouse in Goodland, Kansas across the street from the Goodland Public Library.